Walter censored with U 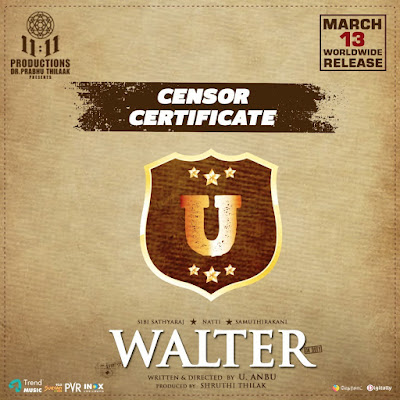 Sibiraj’s Walter has carved a niche of creating groovy expectations at each point of the process. From the prestigious title to commendable star-cast, scintillating trailers and ‘Walter’ Devaram himself launching the audio, the film has generated an unsullied assurance of offering a strong content. And now, there’s additional attention gained by the film for CBFC members who have passed ‘U’ certificate.

Director  U Anbu says, “It’s yet another galore of positivity. Having made a film based on a sensitive issue, there was a predominant assumption among us on whether CBFC members would zero in ‘UA’. However, such perceptions were proved wrong as they felt the film to be neat and clean, thereby giving ‘U’ certificate. “Walter” deals with a strong blazing issue on child trafficking, which is very much prevalent in Tamil Nadu. We often come across newspaper articles and TV news flashing about the newborn babies and kids missing.  This affected me on the emotional levels and wanted to make a film on this. However, as I ventured into the phase of research, I came across many shocking facts, which I have tried presenting through Walter. This will be a very special film for Sibiraj sir and will be a milestone in his career.”