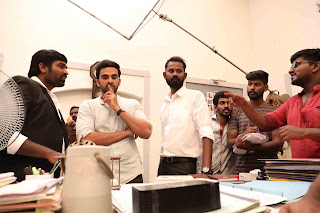 Ashok Selvan-Ritika Singh starrer “Oh My Kadavule” trailer launched by the most celebrated actor Suriya has been experiencing heavy showers of acclaims.  While the teaser itself had created an abundance of huge praises, the theatrical trailer has found a exquisite escalation. Moreover, it has gained 2.5 Million views on YouTube now.

What has become the intriguing element in the trailer is the way how the makers have prepared the audiences with film’s premise. It starts with a beautiful Rom-Com touch, where all the characters get established. But the ultimate surprisal arrives by the final moments, where Vijay Sethupathi’s character offers a ‘Golden Ticket’ to Ashok Selvan. Ask filmmaker Ashwath Marimuthu and he says, “That’s going to be a little surprise in the movie. I am sure, by now many have come up with their assumptions, but there’s going to be few unheralded twists. Apart from romance and comedy, each and every character in the film is inclined to its own emotional values. We as a team believe that it would be a befittingly good treat for Valentine Day.”

Produced by G. Dilli Babu for Axess Film Factory in association with Abhinaya Selvam for Happy High  Pictures, the film is directed by Ashwath Marimuthu. Slated to hit screens on February 14, 2020 as Valentine Day treat, Sakthi Film Factory is releasing the movie across Tamil Nadu. Vijay Sethupathi is playing an important role in this film, which has Vani Bhojan, MS Bhaskar and Sha Raa appearing in pivotal characters. Gautham Vasudev Menon will make a cameo appearance playing himself.