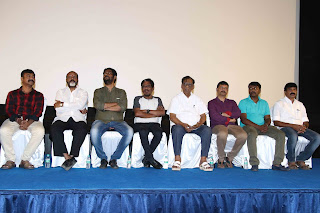 The recent announcements about Santhanam’s Server Sundaram and Dagaalty hitting screens on the same date –January 31, 2020 had created a huge sensation. Realizing that such a decision would have adverse results in box office run of both the movies, the respective producers submissively discussed along at Tamil Film Producer Council for an amicable decision. Later, both the producers met the press and media to reveal about their release plans. The occasion had the presence of TFPC President Bharathiraja, FEFSI Siva, Producer Suresh Kamatchi, Producer Rajan, ‘Server Sundaram’ Producer Selvakumar and ‘Dagaalty’ producer Choudary.

Producer Suresh Kamatchi said, “The official announcements pertaining to both the films – Server Sundaram and Dagaalty hitting screens on the same date were made through the print advertisements. With the  producers approaching  TFPC regarding this issue, our President Bharathiraja sir has given them an amicable decision, which is get to Dagaalty released on January 31, 2020. The producers of Server Sundaram have agreed to get their film released on February 14, 2020. It is noteworthy that no one has the rights to force or influence the producers to get their movies released on respective days. Nonetheless, as well wishers in the industry, we have made this decision with the complete acceptance of both the parties and I thank them for their cooperation and understanding.

Selvakumar, Producer, Server Sundaram said, “After going through lots of hardships for nearly couple of years, we finally found a sigh of relief on getting Server Sundaram released on January 31, 2020. However, with Santhanam sir’s other movie ‘Dagaalty’ hitting screens on the same date, we have accepted to get our movie postponed to February 14. This is actually done in favour for all of us as both the movies shouldn’t get affected with its box office run getting released on same date.

Choudary, producer, Dagaalty said, “I owe a lot to each and everyone, who have been kind and supportive in sorting out this issue. This is my maiden production and I am in a state of mind, which can be compared to a mother in labor pain delivering her first baby. We are bounded to unconditional thanks to producer Selvakumar sir for paving way for the release of Dagaalty on January 31, 2020.”

Producer Bharathiraja, TFPC President said, “This is a wonderful moment as both the producers gave respect to TFPC’s intervention into the issue. I would say that both the producers have perfect justification and there’s nothing wrong on their sides. Both of them have struggled a lot in making these films. These days, releasing a film has become a tougher challenge than making it. More than our decisions, it’s their good-heartedness that is worthy of appreciations. Both the producers are genuine personalities. When it comes to Server Sundaram, I have a special connection to it as the title itself enlivens beautiful memories of watching Nagesh sir’s performances. Such a decision hasn’t favoured them alone, but cinema industry as well. I wish great success for the success of both the movies.”