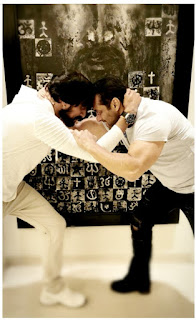 Fetching friendship beyond boundaries, Kichcha Sudeep has always enjoyed the privilege of sharing a special bond with iconic actors and technicians across the country. With his multi-lingual film ‘Bailwan’ all set to have its worldwide release on September 12, 2019, the actor and his team have been finding the reception invariably spectacular. Especially, with the top league actors of every industry showing their earnest support towards the film in launching the first look and trailers, Bollywood’s emperor Salman Khan has extended his special gesture of promoting Bailwan in a unique way by exhibiting the same wrestling posture as in his yesteryear blockbuster film ‘Sultan’, which featured him in the role of a wrestler.

Kichcha Sudeep, who is sharing the screen space with Salman Khan in ‘Dabangg 3’ says, “Such a friendly gesture for an iconic superstar like Salman Khan is priceless and am really happy about the personal interest he took to do such things.”