Organisers revealed details of the event taking place on 15 & 16 August at a local press conference! 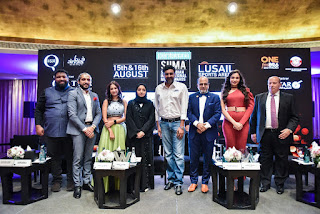 The biggest Summer in Qatar program this year is reaching its culmination and to mark its end, the prestigious annual Pantaloons South Indian International Movie Awards (SIIMA) will be held in Qatar for the first time with over 200 celebrities from Indian cinema attending the two-day event on 15 & 16 August. Legendary actors Chiranjeevi and Mohanlal will be the guests of honor for the event. Powered by ONE FM 89.6, the event will be held at the Lusail Indoor Arena hosting close to 8000 people during the event celebrating South Indian cinema in four categories namely, Telugu, Tamil, Kannada and Malayalam.

– W Doha and Indian actresses Andrea Jeremiah and Manvika Harish. The conference was attended by the media and guests from different organizations, along with sponsors. Mr. Vishnuvardhan Induri revealed the complete guest list of the celebrities attending SIIMA 2019 and also disclosed the Short Movie winners and the expected performances at SIIMA 2019.

Mashal Shahbik from QNTC commented, “At QNTC we are pleased to see exciting cultural events such as SIIMA which offers family friendly entertainment, a core tenet of Summer in Qatar. Our partners at Radio ONE FM have been instrumental in bringing First North, and now South Indian cinema to audiences during the Qatar-India Year of Culture.”

The two-day event is split into 4 languages; 15th August will host Kannada and Telegu and 16th August will host Malyalam and Tamil. The first day of the event falls on India’s Independence day. Tickets are available on aynatickets.com, starting from QR50.

‘We highly appreciate the two main pillars for extending their support and confidence on us, Qatar National Tourism Council and Ministry of Culture & Sports. This would be our 5th mega event in 2019 and that it mainly because of the support and the confidence by our stake holders and the enthusiasm from the audience that motivates us to push the extra mile. SIIMA is a must watch for all, and from the way preparations are moving it’s going to be a first time ever in Qatar. Sincere appreciation to Vishnu and team for stepping onboard with our dreams to host in Qatar’ Quoted by Naveed Abdulla – CEO- 89.6 ONE FM Qatar


Now in its eighth year, SIIMA is the leading and most-viewed award show in the industry, recognizing talent and excellence while taking South Indian cinema across global horizons to create an engaging platform for South Indian actors to reach international fans.

“This Qatar-India Year of Culture, SIIMA 2019 happens to be the biggest event catering to a huge population This will be the first time Doha will experience a massive line up of Indian Stars under one roof. We are very excited, and it clearly meets our objectives to promote Qatar as an international Event Destination.” Quoted by Jassim Mohammed CCO, ONEFM QATAR

Apart from the movie awards, a business award to felicitate South Indian Business achievers will be held on the 14th of August at the Luxurious Mondrian Doha. The night will also felicitate Qatari Icons and Socio-economic contributors from country. The awards will be presented by celebrities and top industry professionals.