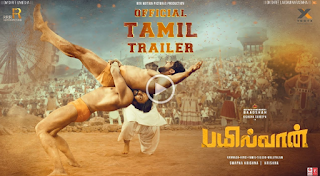 The midday for YouTube had its massive arrival of Kiccha Sudeep starrer “Bailwaan” trailer that was launched by none other than darling of crowds – actor Sivakarthikeyan.  The trailer with a running length of 1min 45secs exhibits Kichcha Sudeep in an overpowering avatar of a wrestler. What’s more intriguing about the trailer is the way it narrates the complete story of the protagonist’s strengths, weakness, downfalls and triumph over the hurdles.  The trailer also establishes the prominent characters in the film, especially Suniel Shetty, who is appearing in a much pivotal role.  The mind-boggling action sequences by Ram-Lakshman, Dr. K. Ravi Verma & Larnell Stovall (Boxing) and A. Vijay (Kusthi) sequences prove to be the ultimate show stealers leaving us crave for more. The dialogues are much more enthralling as they aren’t merely punch dialogues, but impart an inspiring message about self-confidence and never-give up mantra.

Scheduled for worldwide release on September 12, 2019 simultaneously in Tamil, Telugu, Hindi, Malayalam and Kannada, the film marks second collaboration of Kichcha Sudeep and director Krishna, who have already proved their success with erstwhile venture in Sandalwood. Bankrolled by Mrs Swapna Krishna for RRR Motion Pictures, the grandeur values including the set works stand out to be a highly noticeable factor.  The film also features Aakanksha Singh, Sushant Singh, Kabir Duhan Singh, Sharath Lohitashva and many others in important roles.

The film had an enchanting curtain raiser across the Indian film panorama with icons of Indian Cinema unveiling the first look posters - Mr. Sunil Shetty in Hindi, Megastar Mr Chiranjeevi in Telugu, Mr. Vijay Sethupathi in Tamil and Mr. Mohanlal in Malayalam.